Ovigerous females of the lernaeopodid copepod Salmincola stellata Markevich, 1936 were collected in April 2021 from Japanese huchen, Parahucho perryi (Brevoort, 1856) (Salmonidae), held in a tank at the Yama No Aquarium in Kitami, Hokkaido, northern Ja- pan. All of 13 Japanese huchen examined (80–120 cm in total length) were individually infected with 20–30 females of S. stellata. The females were mostly at- tached to the oral cavity wall, but a few were found on the fins and near the jaw teeth and gill arches. Before this collection, the copepod was found in October 2016 on captive fish but disappeared after repeated manual removal in February 2017. Nonetheless, in November 2020, the copepod was introduced to the aquarium together with wild Japanese huchen trans- ported alive from Lake Shumarinai, Hokkaido. It has since maintained its population in the tank. Although more heavily infected fish were emaciated and reduced their feeding activity in October 2016, no such signs were found in the fish examined in April 2021. 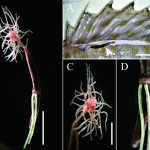 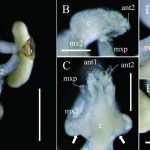