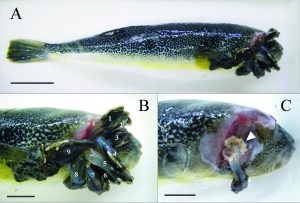 As many as nine adults of Conchoderma virgatum Spengler, 1789 (Cirripedia: Thoracica: Lepadiformes: Lepatidae), were found to be attached in a group to the right gill cavity of Takifugu stictonotus (Temminck and Schlegel, 1850) (Tetraodontiformes: Tetraodonti- dae), caught on 14 January 2011 in a set net installed in the southern Sea of Japan off Kasumi, Hyogo Pre – fecture, western Japan. This represents the first record of direct attachment of C. virgatum to the gill cavity of marine fish.