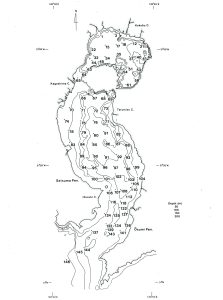 Kagoshima Bay is located in the southern part of Kyushu, Japan and is elongate and southward-opening with a lenghth of about 75 km from north to south and a width of about 25 km (Fig. 1). The bay is an area of volcanic activity of Sakurajima volcano under the influence of the Kuroshio Current. Most of the Head environment is occupied by an acidic water mass as result of the submarine fumarolic activity. Ecological analysis of benthonic foraminifera and sedimentaly environmens in Kagoshima Bay was reported by Oki (1989). Subsequently, the relationships between ostracod populations and different marine environmental parameters in Kagoshima Bay were published by Bodergat et al. (2002a, b, 2006).