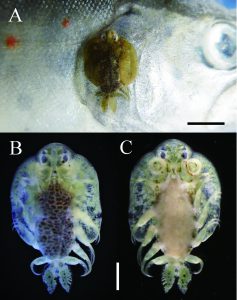 An adult female of Argulus coregoni Thorell, 1864 was collected in September 2018 from the opercle of a red-spotted masu salmon, Oncorhynchus masou ishikawae Jordan and McGregor, 1925, in the upper Echi River, one of the tributaries of Lake Biwa, the largest lake in Japan, Shiga Prefecture. This parasite was previously collected from red-spotted masu salmon and Ayu, Plecoglossus altivelis altivelis (Temminck and Schlegel, 1846), in some tributaries of Lake Biwa. Argulus coregoni is considered to commonly occur in the tributaries of the lake. 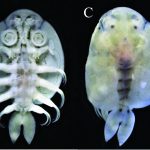 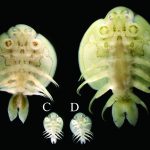