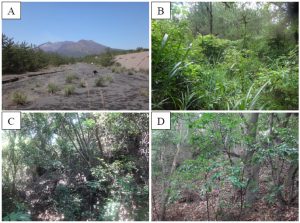 In total, 34 ant species belonging to 23 genera in four subfamilies were collected from four types of lava of Sakurajima, with different vegetation on each lava: 14 species from Showa lava, 16 from Taisho, 19 from both An-ei and Bunmei. This figure corresponds to around 30% of the estimated 110 ant species recorded on mainland Kagoshima. In this study, two new species, Pyramica canina and P. hesamera, were found on four types of lava. So far, in total 44 species belonging to 25 genera in six subfamilies were collected from all over Sakurajima. The ratio of Formicinae to other subfamilies was higher on Showa lava than on the other lavas. Ponerinae ants were not collected on Showa lava, and its ratio was higher on An-ei and Bunmei lava than the other lavas. The dominant species was Crematogaster nawai on Showa lava. C. nawai is an ant species which inhabits the open land. On the other hand, the dominant ant species on Taisho/An-ei/Bunmei lava was Nylanderia flavipes and Pheidole noda, which inhabits mainly forests and the edge of forests. Nomura-Simpson’s Coefficients (NSC) between An-ei and Bunmei lava was 0.89, the heighest value among the combinations. However, the similarity coefficient between Showa and Bunmei lava was low, only 0.36. In the survey in 2006, a difference in the similarity of species composition and dominant species was seen between Showa/Taisho and An-ei/ Bunmei lava, and a difference in the number of species was seen between Showa and Taisho/An-ei/Bunmei lava. On the other hand, in this study, a difference in dominant species changed between Showa and Taisho/ An-ei/Bunmei lava. 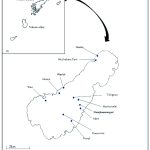 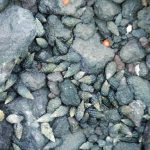