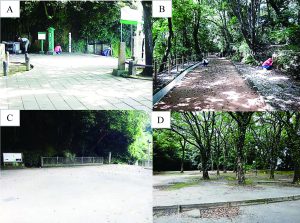 Ant faunal survey was conducted in Shiroyama Park, Kagoshima City, southern Japan. It is surrounded by downtown areas but has well-preserved forests. Sampling sites were selected in open area (3 sites) and along forest promenade (13 sites). A total of 27 ant species was collected, six of which were aliens and mainly collected in disturbed or open sites. For exam- ple, Cardiocondyla itsukii, Nylanderia amia and Tetra- morium kraepelini were collected only from the open sites facing the forest edge. However, the famous tramp Technomyrmex burunneus was collected from all of the 16 sampling sites, including those covered with forest canopies. Another alien, Tetramorium bi- carinatum, was found in seven sites, mostly along the promenade in the forest. These two species may have the possibility to enter natural habitats, thus should be targets for continuous monitoring. 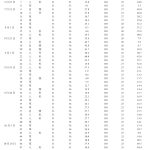 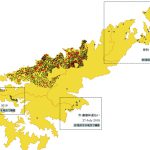