Two females and two males of the cymothoid iso- pod Mothocya parvostis Bruce, 1986 were found on two of three individuals of Japanese halfbeak, Hyporh- amphus sajori (Temminck and Schlegel, 1846), from the central Seto Inland Sea off Ikunoshima Island, Hi- roshima Prefecture, Japan. Each infected fish hosted a female and a male of M. parvostis in the right and left branchial cavities, respectively. The female and the male of M. parvostis collected are briefly described. To date, M. parvostis has been reported only from Ja- pan, where the species occurs in the eastern East China Sea, the southern Sea of Japan, the Seto Inland Sea, the western North Pacific Ocean, and the southern Sea of Okhotsk. Five species of wild fishes, which belong to five families in two orders, are known as hosts of the isopod, and Japanese halfbeak is considered the most important host in terms of high prevalence and many records of the isopod from this fish species. There used to be an outbreak of the isopod in cage- cultured fingerling Japanese amberjack, Seriola quin- queradiata Temminck and Schlegel, 1845, in western Japan, but no such case has been reported recently. The isopod is harmful to its hosts. It negatively affect- ed the body condition of wild Japanese halfbeak and also retarded the growth of tank-reared juvenile Meji- na, Girella punctata Gray, 1835. It is necessary to con- duct a taxonomic study of M. parvostis and its closely related species, Mothocya sajori Bruce, 1986, which is also found in branchial cavity of Japanese halfbeak. 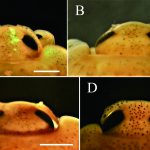 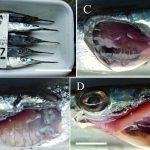 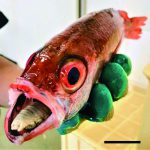