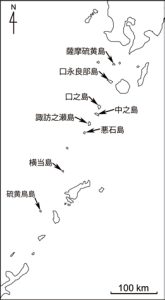 The volcanic arc off Kyushu, which stretches some 1000 km southwestward, is associated with an active back-arc basin, the Okinawa trough. The volcanoes on these southern islands are, from north to south, Kikai caldera (Satsuma- Iojima and Showa-Iojima formed during the 1934-1935 submarine eruption), Kuchinoerabujima, Kuchinoshima, Nakanoshima, Suwanosejima, Akusekijima, Yokoatejima, Io- Torishima, and a submarine volcano NNE of Iriomotejima. The edifices and mode of eruptions of these volcanoes are quite different from each other. There are two submerged calderas; Kikai caldera and an unnamed caldera around Yokoatejima. Kikai caldera is one of the youngest calderas in Japan. Its latest caldera-forming eruption occurred approximately 7300 years ago, destructive pyroclastic flows reaching the southern parts of Kagoshima. It is widely believed that the Jomon culture in southern Kagoshima completely perished during this eruption. The associated volcanic ash spread all over Japan, and has still been preserved in the soil layers in many places. Although the erupted rocks of these volcanoes consist predominantly of pyroxene andesite, Kuchinoshima volcano erupted mainly hornblende andesite. Kikai caldera only erupted magmas of bimodal composition (basalt and rhyolite). 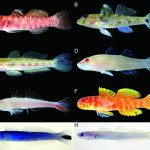 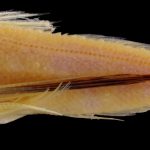 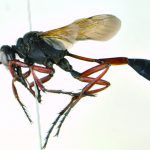