A giant mottled eel, Anguilla marmorata Quoy and Gaimard, 1824, was collected in a small river in an ur- ban area of Shizuoka City, a capital of Shizuoka Prefec- ture, central Japan. The eel was about 140 cm in total length. In Japan, the species has been collected in fresh and brackish waters in the subtropical and temperate regions influenced by a warm current, the Kuroshio. This current flows in the western North Pacific Ocean off the coast of Shizuoka Prefecture, and the eel caught is considered to have migrated from the ocean to the river as a juvenile and to have survived and grown there because the river maintains warm water temperatures by receiving the drainage from the urban area including a nearby factory throughout the year. Freshwater fishes and crustaceans were abundantly found in the river and were most probably preyed on by the eel. 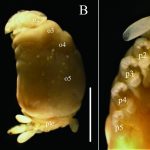 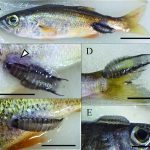 The cymothoid isopod Nerocila phaiopleura parasitic on gnomefish, Scombrops boops, in coastal Pacific waters of central Japan, with an updated list of the hosts reported from Japan (Kazuya Nagasawa and Susumu Isozaki) 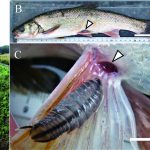